Yesterday morning, an envelope slipped through the letter box. It felt like an invitation to something and on the back were the intriguing words “10 Downing Street”.

It turned out to be an invitation from the Prime Minister to a reception to celebrate the LGBT community in the United Kingdom.

Will I be going? You bet I will.

Receiving that invitation made me realise in some small part why I’ll be marching in today’s Glasgow Pride march.

Now, Pride is an emotion that Christians tend to be a little wary of. After all, didn’t our Lady have something to say about scattering the proud in the imagination of their hearts? Surely she wouldn’t be found dead on a gay pride march?

Well, think again. Our Lady will be marching today in the form of a group of folk from St Mary’s, Cathedral. (Notre Dame de Glasgow indeed).

The word “pride” covers a number of things in English these days – some negative and some positive. The proud hearts that Mary was wanting to send on their way were surely those of the haughty and the disdainful. Rather a different crew to those marching from Kelvingrove into town today.

The pride that is celebrated today is a sense of delight in the well-being of one’s self and others. Entirely a different thing, I think.

I’ll go to the Prime Minister’s reception full of pride in many people.

Catholic and other religious groups were well-represented at the World Pride March 2012 which wound through the streets of London on July 7th.  The Soho Masses community of London wore T-shirts that said “All Are Welcome at Soho Masses” on the front, while the reverse said “Nobody Knows I’m Catholic.”    Members of Quest, a Catholic LGBT group in the United Kingdom marched with their banner. And New Ways Ministry was present, proudly marching with our banner amid the thousands upon thousands of marchers and spectators.

Here are some photos which I hope will give you a sense of the strong faith presence in the march, as well as the diversity of attendees: 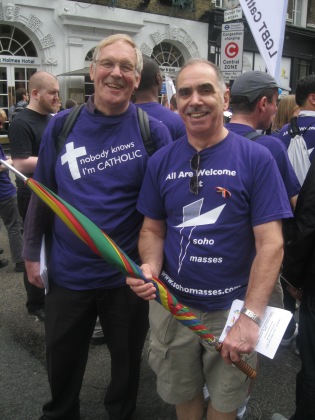 This weekend, organized contingents of Mormons marched in LGBT pride parades in 8 cities, from New York to Santiago de Chile, marking the high point in an historic season in LDS LGBT history that began with the Mormons Building Bridges Parade in Salt Lake City on June 3.

In Seattle, the Mormons for Marriage Equality contingent counted 55 marchers at the beginning of the Pride parade. As the group made its way down the parade path, an additional 20 Mormons left the sidelines to join, repeating scenes witnessed in Washington, DC, when the parade route became a site for reunions between active Mormons and gay Mormons long estranged from the faith community.

In New York City, 50 gay Mormons and allies marched behind the banner of Affirmation, the nation’s oldest Mormon LGBT group. Some held signs quoting a verse from the Book of Mormon: “All are alike unto God.” Nineteen LDS marchers held the Affirmation banner in Houston, as did an estimated 100 LDS LGBT and allied marchers in Santiago de Chile.

The largest contingent of the weekend gathered in San Francisco, where more than 100 LDS people gathered to march behind the Mormons for Marriage Equality banner, winning the parade’s award for “Absolutely Outrageous” contingent. Mitch Mayne, who is openly gay and holds a leadership position in his San Francisco LDS congregation, offered an opening prayer for the group. “I felt prompted to ask our Father to bless us with the capacity to be ambassadors of His unconditional love,” said Mayne. 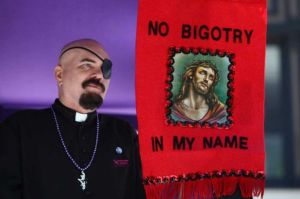 A new wellspring of support will be on display when the annual Pride Parade gets underway Sunday in downtown Seattle.  People of faith are coming out for same-sex marriage, speaking with voices and feet, even if their bishops continue to stand against marriage equality.

The Mormon contingent in Seattle’s Pride Parade on Sunday will dress in classic missionary attire of shirts and ties, over which marchers will be wearing  “Approve Referendum 74” t-shirts.

“We stand for marriage equality:  We don’t stand AGAINST anything, and we are not interested in attacking anyone,” said Scott Holley of Mormons for Marriage Equality.  Holley’s church stood against same-sex marriage four years ago and was instrumental in passage of California’s Prop. 8.

The newly formed Catholics for Marriage Equality will be marching nearby in the parade under a big, newly made banner.  Seattle Archbishop J. Peter Sartain has fought against marriage equality, but CME leader Barbara Guzzo is standing her ground and walking her talk.

Colors of the rainbow flag reveal the many faces of the queer Christ in the following new Rainbow Christ Prayer by lesbian author Kittredge Cherry and gay theologian Patrick S. Cheng.

Rainbow flags are flying around the world in June for LGBT Pride Month. Rainbows are also an important symbol in many religious traditions. The Rainbow Christ Prayer honors the spiritual values of the LGBT movement.

The prayer matches the colors of the rainbow flag with the seven models of the queer Christ from Patrick’s new book “From Sin to Amazing Grace: Discovering the Queer Christ.

Rainbow Christ, you embody all the colors of the world. Rainbows serve as bridges between different realms: heaven and earth, east and west, queer and non-queer. Inspire us to remember the values expressed in the rainbow flag of the lesbian, gay, bisexual, transgender and queer community.
Red is for life, the root of spirit. Living and Self-Loving Christ, you are our Root. Free us from shame and grant us the grace of healthy pride so we can follow our own inner light. With the red stripe in the rainbow, we give thanks that God created us just the way we are.
Orange is for sexuality, the fire of spirit. Erotic Christ, you are our Fire, the Word made flesh. Free us from exploitation and grant us the grace of mutual relationships. With the orange stripe in the rainbow, kindle a fire of passion in us.
– read the complete prayer at Jesus in Love Blog

Come and bless Adonai,
all you who serve Our God,
ministering by night in God’s house!
Lift up your hands in the sanctuary,
and bless Adonai!
May you be blessed from Zion
by the One who made heaven and earth!
Psalm 134 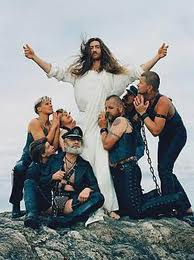 During Pride month I ponder the place of queer people in the congregation of God worshipers. In the face of traditional and ongoing discrimination by religious bodies I can scarcely believe that this invitation to come and bless and to be blessed is for me. If I come will the door be open? If I bless will hearts be receptive? As one who is among those cast out and silenced, how shall I respond to this invitation?
There is an intrinsic fear among the various spiritual expressions toward queer folk. It is the fear that tans-les-bi-gay-intersex-asexuals transgress the purity of the congregation. We who seek out forbidden pleasure are polluted by our sexual “proclivities.” Our impure presence reflects upon others casting our “shame” beyond ourselves and onto all we associate with. As those in ancient times, we are made to feel that we should shout “Unclean! Unclean!” giving time for the clean to flee unscathed.
People like us are rarely granted entrance to the assembly of the Sacred. Our presence may contaminate and make profane that which is holy. Often we find the door to the divine barred.
-continue reading at The Bible in Drag

Over 300 Mormon allies dropped their bibles and marched in Utah’s Gay Pride parade on Sunday (3 June).

The group Mormons Building Bridges said they wanted to send a message of love to the LGBT community, saying it was compatible with their faith.