The story of Ruth and Naomi and their deep love has often been used to illustrate love between women in the Bible.  There is more to the book than that alone, for a queer reading. Although the book begins as the story of Ruth and Naomi, it ends as that of Ruth, Naomi and Boaz, as Mona West makes clear in her chapter on Ruth for The Queer Bible Commentary, concluding with a reflection on its lesson for queer families – in all their variety.

With the strong public interest in the struggle for marriage equality and gay adoption, we often overlook the simple but important fact that not all queer families are imitations of conventional families, differing only in the minor detail of being headed by a couple of the same biological sex. We come in a multitude of forms – like the family I meet recently, comprising three men who have just celebrated 25 years of living as a mutually supportive and committed triple. This obviously does not fit with the modern conception of “traditional” marriage and family – but nor do the families of Jesus and his disciples in the New Testament, and nor does the family of Ruth, Naomi and Boaz, as we know it by the end of the book.

END_OF_DOCUMENT_TOKEN_TO_BE_REPLACED

The kindom of heaven is like a buried treasure found in a field. The ones who discovered it hid it again, and rejoicing at the discovery, went and sold all their possessions and bought that field.

Or again the kindom of heaven is like a merchant’s search for fine pearls. When one pearl of great value was found, the merchant went back and sold everything else and bought it.

If you are playing this game with straight friends they will not get how freeing and affirming these parables are. For them, sexual orientation and sexual identity have never been hidden or sought after. It’s hardly a treasure but more of a given constant. For queers, however, the discernment of deep identity markers which set us apart from the (hetero) norm can be either an experience of anxiety or liberation – often a mixture of both. Even more reasons for us to identify with the thrill of these parables. Leutwyler’s self portrait captures the sense of  “neediness” which lends urgency to the searching and boundless joy in the finding

-continue reading at  The Bible In Drag – Queering Scripture.

“Two extraordinary people … that have spent the greater part of a half century … fighting for their right to live the way so many of us, frankly, take for granted.“ 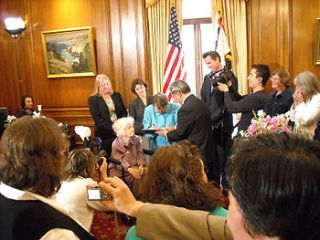 Del Martin and Phyllis Lyon founded the first lesbian organization in the United States and have fought for more than 50 years for the rights of lesbians and gays. On June 16, 2008, Martin and Lyon became the first gay couple to be legally married in California.
Martin and Lyon both earned degrees in journalism. While working as journalists in Seattle, the two became romantically involved. The couple relocated to San Francisco and moved in together on Valentine’s Day 1953.
In 1955, finding it hard to develop a social network in San Francisco, Martin, Lyon and a small group of women founded the first lesbian organization, called the Daughters of Bilitis. The name was inspired by Pierre Louys’s “Songs of Bilitis,” a collection of poems celebrating lesbian sexuality.
Though it was intended to be a secret society, Martin and Lyon wanted to make the Daughters of Bilitis more visible. The group began publishing a monthly magazine, called The Ladder, which was the first-ever lesbian publication. As editors of the magazine, they capitalized the word “lesbian” every time it appeared.
In 1964, while fighting to change California sex laws criminalizing homosexuals, the couple joined religious and gay community leaders to form the Council on Religion and the Homosexual (CRH). This organization was at the forefront of the movement to gain religious support on gay rights issues. Both women served on the founding CRH board of directors.
In 2004, when gay marriage was offered in San Francisco, Martin and Lyon were the first to wed. A California appellate court ruling subsequently invalidated their marriage. Then in May 2008, a California Supreme Court decision provided same-sex couples the right to marry. On June 16, 2008, they were the first same-sex couple married in California. The wedding was officiated by San Francisco Mayor Gavin Newsom.
Martin and Lyon have published two books together, “Lesbian/Woman” (1972) and “Lesbian Love and Liberation” (1973). On their 50th anniversary, the documentary “No Secret Anymore: The Times of Del Martin and Phyllis Lyon” premiered. In 2005, the National Gay and Lesbian Journalists Association inducted Martin and Lyon into the LGBT Journalists Hall of Fame for their pioneering work on The Ladder. In 2007, they received the 2007 Gay and Lesbian Alliance Against Defamation (GLAAD) Pioneer Award.
Bibliography
“Del Martin & Phyllis Lyon.” (The Lesbian, Gay, Bisexual and Transgender Religious Archives Network).
Kornblum, Janet. “Gay Activists Blaze Trail for half century.”  USA Today. March 4, 2004
“Lesbian Pioneers Wed at San Franciso City Hall.” CNN.  June 17, 2008
Streitmatter, Rodger.  “Phyllis Lyon & Del Martin.”  National Lesbian & Gay Journalists Association: LGBT Journalists Hall of Fame.  June 5, 2008
Articles
Gordon, Rachel. “Lesbian Pioneer Activists See Wish Fulfilled.” San Francisco Chronicle. June 16, 2008
Marshall, Carolyn. “Dozens of Gay Couples Marry in San Francisco Ceremonies.” The New York Times. February 13, 2004
McKinley, Jesse. “Same-Sex Marriages Begin in California.” The New York Times. June 17, 2008
Books
Lesbian/Woman

Lesbian love and liberation (The Yes book of sex)

Andrew Sullivan is an author and journalist who regularly appears on national television and whose commentary is featured in major national publications. He is a leading advocate of same-sex marriage.

“The most successful marriages, gay or straight, even if they begin in romantic love, often become friendships. It’s the ones that become the friendships that last.”

Andrew Sullivan was born in South Godstone, a small town in southern England, in 1963. After earning a B.A. in modern history from Oxford University he received a fellowship to study at Harvard University, where he earned a masters degree in public administration and a Ph.D. in government.
In 1986, he began at The New Republic (TNR) and in 1991, he was named the magazine’s editor, the youngest in its history. In the five years Sullivan was at the helm, the magazine’s circulation grew and advertising revenues increased. Sullivan expanded TNR’s sphere beyond politics to cover such cultural topics as same-sex marriage and affirmative action. He created a stir by publishing excerpts from the controversial study on race and IQ, The Bell Curve.
In the 1990’s Sullivan became known for his writing on gay issues. His article “The Politics of Homosexuality” has been called the most influential article of the decade in gay rights. Virtually Normal: An Argument About Homosexuality was the first book to advocate civil marriage rights for gay couples. Sullivan also publishedLove Undetectable: Notes on Friendship, Sex, and Survival and edited a reader,Same-Sex Marriage: Pro and Con.
As a practicing Catholic, Sullivan has challenged the Roman Catholic Church’s position on homosexuality. In Virtually Normal he takes the position that the Bible forbids homosexuality only when it is linked to prostitution or pagan ritual.
Sullivan started his blog, The Daily Dish, in 2000. His articles have appeared in The New Republic, The Wall Street Journal, The New York Times, The Washington Postand Esquire. He is a regular guest on The Chris Matthews Show, Charlie Rose, Anderson Cooper 360°, Meet The Press, Face the Nation, Nightline, NPR’s Fresh Airand Larry King Live.

Sharp words cut like a sword,
but the tongue of the wise brings healing.

This proverb is a reversal of the old childhood mantra: “Sticks and stones may break my bones, but words…” Well, supposedly words will never hurt us, but they do. Not only the slurs flung our way, but the very words that jumble in us as in the word-art above. Those discerning their orientation – lesbian, gay, bisexual, transgender, and questioning persons – are especially vulnerable to sharp words, receiving their thrust deep into the psyche.

The queer community for a number of years has been reclaiming words. In a very healthy way we have taken the swords meant to hack us and turned them into shields of honor. “Faggot,” “queer,” “gay,” “homo,” “sissy,” “butch,” “dyke” and others are now internalized as points of pride instead of points of shame.

The lesbian biblical scholar Mona West states it succinctly: “Oppressed peoples over the years have understood the power and importance of choosing their own words to name themselves rather than allowing the dominant culture to assign negative meaning to certain words that are used to demonize a group of people. Words are powerful tools used to describe experience and shape reality” (from the article Queer Spirituality).

-Read David Popham’s full reflection at “The Bible in Drag“

As the battle over gay marriage heats up in this election year, one evangelical Christian writer is calling for a truce, fearing that the outspoken opposition to gay marriage among some church leaders could alienate an entire generation of religious youth.

“Evangelicals have been so submitted to these culture wars for so long, so that’s hard to give up,” evangelical writer and speaker Rachel Held Evans, 31, told msnbc.com. But “the majority of young Christians really, really, really want to stop with the political emphasis.”

Held Evans, who regularly speaks at Christian colleges, said the young Christians she meets are much more open to gay rights than are older generations, an observation backed up by polling data.

A 2011 survey by the Public Religion Research Institute shows the generation gap between young Christians and their elders is large, with 44 percent of white evangelicals aged 18-29 in support of marriage equality compared to only 12 percent of those 65 and older.

According to the same survey, nearly 70 percent of young Christians also agree that religious groups are alienating young people by being too judgmental about gay and lesbian issues.

Coming to terms with one’s self is not easy for homosexuals in a society where gender is limited to either male or female.

Raymond Alikpala, 46, a lawyer and formerly a seminarian, knows very well the anguish of living in the shadows having done so in the first 38 years of his life.

“I came out because I was tired of hiding who I really am. I wanted to be able to finally live my life honestly and proudly. I stopped caring about what others would think should they find out I  ambakla (gay),” says Alikpala.

He shares his story of growing up a devout Catholic and harboring the secret of his homosexuality in a book “Of God and Men” to be launched June 16, 2012 at  3  p.m. at  Bestsellers Bookstore,  4th Level, Robinson’s Galleria, Pasig City.

Alikpala said a number of his friends encouraged him to write his story “as catharsis for my years in the closet.” He felt however that “it was much more than that.”

Perhaps because of his years in the seminary, Alikpala’s objective in writing the book is more evangelical. “To spread the good news that God loves bakla, lesbians, bisexuals and transgenders and transsexuals as much as She loves all Her other children.”

Queering the Church
Blog at WordPress.com.