The first same – sex weddings have come to Australia – at least, for those able to get to the Australian Capital Territory (ACT) of Canberra, where the state law took effect today. The Federal government has lodged a court appeal, claiming that the territory has acted outside of its authority with this legislation, so it’s possible that the law may be struck down when the court rules later next week. For now, gay weddings in Canberra can continue. Notably, among the celebrants officiating over the nuptials is one religious minister, Reverend Roger Munson of the Uniting Church.

Sydney Morning Herald reports on some others: END_OF_DOCUMENT_TOKEN_TO_BE_REPLACED

“Letters to the Catholic Right” has a post considering a dispute between Robert George and friends on one side, and Law Professor Charles Reid on the other, over what they did or did not say in a recent debate about marriage at Notre Dame. For a synopsis of the dispute see the full post, and follow the links for summary of the debate.

But here’s the key point made by LCR, which needs to be better appreciated by the “Catholic Right” he is addressing, who are convinced that the only valid marriage are of the penis – in – vagina sexual kind: that’s not the model displayed by the Holy Family, and nor has it always been the preferred model in Church history.

Here is the conclusion of the essay:

What is Marriage? Let’s Think a Little Harder.

No, what’s really astonishing to me is that this group of Catholics made this argument at a Catholic university during a debate on Catholicism and public policy and then defended it in writing at the start of Advent season.

Reid gets the irony. He writes, “In that paradigm of marriage for Catholics, the union of Mary and Joseph, it could only have been love that held the Holy Family together, not sex, since Catholics believe that Mary was ‘ever virgin.’”

But it’s not just Mary and Joseph; Catholic teaching is very respectful of a tradition known as the Josephite marriage, which is a legitimate marriage, based on spiritual union, in which the spouses don’t have sex. In Fulton Sheen’s words, “among some Jews and among some great Christian Saints, the vow of virginity was sometimes taken along with espousals. Marriage then became the frame into which the picture of virginity was placed. Marriage was like a sea on which the bark of carnal union never sailed, but one from which one fished the sustenance for life.”

So if we’re putting Reid’s view (“love makes a marriage”) up against George’s (“marriage requires penis-in-vagina sex”) then the weight of Catholic thinking ought to come down on Reid’s side.

Administrators at the University of Notre Dame (UND) and The Catholic University of America (CUA) arrived at opposite decisions in December about  supporting LGBT students on their campuses:  UND accepted a student-run gay-straight alliance as part of a comprehensive pastoral plan, while CUA rjected a proposal for a gay-straight alliance.  Bondings 2.0 previously covered the decisions here for CUA and here for Notre Dame.

Members of Notre Dame’s 4 to 5 Movement

Notre Dame’s release of the pastoral plan, Beloved Friends and Allies, received widespread praise from students and Catholics nationwide alike. Alex Coccia, student leader of the 4 to 5 Movement that had spearheaded the push for an LGBT group, wrote in the University’s student newspaper, The Observer:

“This plan is an enormous accomplishment for the entire Notre Dame family. We would like to thank the students, faculty, staff and administrators who have been an integral part of the 4 to 5 Movement through their involvement and support. Now, as students, we have the responsibility to remain dedicated through the implementation process in order to utilize the full potential of this pastoral plan. Though we remain fully committed to these efforts, today we celebrate this achievement for our community.”

National Catholic Reporter editorialized its support of the decision to recognize and support LGBT students, saying:

“Indeed, what is most noteworthy about the announcement is that it properly recognized that it is not contrary to Catholic teaching to engage in pastoral ministry to any group or to teach and promote tolerance, love and respect for the dignity of every individual. Yes, we all know what the church teaches about same-sex activity. But the church also teaches that all human beings have innate dignity and worth, that they are loved by God and are to be treated with respect. The church teaches that any human community, and any Catholic community worthy of the name, must enflesh this respect for human dignity in the way it treats all of its members.”

In contrast, The Catholic University of America denied an application for CUAllies, an LGBTQ and Ally student organization, after nearly ten months of dialogue under claims it could too easily become an advocacy group for the “homosexual lifestyle.” In a column in National Catholic Reporter, Fr. Peter Daly described just how troubling  the situation for LGBTQ students is at CUA:

“I had been asked to speak to them because of an article I wrote for Catholic News Service recounting my experiences in dealing with gay young people who were suicidal. I concluded the article with the simple observation that no one should ever feel excluded from God’s love and no one should be driven to despair. Evidently, they were surprised to hear that from a Catholic priest, so they asked me to speak to their group.

“CUAllies is not an officially recognized student group at Catholic University…Lack of university recognition means the group cannot reserve rooms, publicize their meetings, receive student funds or be listed in the student directory. They still manage to meet, however. Students use social media, like Twitter, to communicate, just like the pope.”

Bondings 2.o spoke with the student leadership of CUAllies, who stated their re-commitment to establishing a “safe, welcoming, and affirming” campus and identified 2013 as a crucial year for their movement. On January 14th, the first day of classes, students will be launching a 30 Days of Action campaign to build support as further dialogue begins with the administration in the wake of a harsh denial.

Additionally, concerned alumni, parents, and Catholic LGBT supporters nationwide began organizing under the title “Friends of CUAllies” with a solidarity pledge campaign that has gained nearly 650 signatures in an effort to pressure the administration to listen to students.

New Ways Ministry encourages all to assist these students at CUA in their ongoing struggle to provide a safe and welcoming campus for LGBTQ students by signing the pledge here and ‘Liking’ their Facebook group here.

… Jesus replied, “Every religious scholar who has become a student of the kindom of heaven is like the head of a household who can bring from the storeroom both the new and the old.”

To be a student of the empire is to be a student of God’s ways among us. After all, God’s realm is not something “out there” waiting to arrive. Rather God’s reign is the inbreaking of the Sacred into the very midst of our lives, hearts, and souls. This parable invites all who are “students of the kindom” to be responsible for bringing treasures out of the storeroom of faith to aid this inbreaking. I personally feel that les-gay-bi-trans-queer/questioning-intersex-asexual students of the kingdom are uniquely gifted to bring forth the peculiar queer treasure known as “camp.”

For some, camp is a lie that tells the truth. For others, it’s an unexpectedly intense commitment to the seemingly trivial. Some say that camp is so bad that it’s good. For others, it’s so good that it calls into question dominant value systems.”  (Kaltblut Magazine)

– continue reading at The Bible In Drag

One day, a farmer went out sowing seed. Some of the seed landed on a footpath, where birds came and ate it up. Some of the seed fell on rocky ground, where there was little soil. This seed sprouted at once since the soil had no depth, but the sun rose and scorched it, it withered away for lack of roots. Again, some of it landed on good soil, and yielded a crop thirty, sixty, even a hundred time what was sown.

It can be hard for queer folk to here this simple parable of seeds and soil. Typically we are cast as the inhospitable ground with the kingdom (or better empire) of God rejecting us or being choked out by the weeds of our “queerness.” The conformist tradition makes it clear that the realm of the Sacred is hetro-centric and only straight people enjoy the bounty of this terrain.

However, such understanding of the kingdom has missed what it is all about. Today we have smoothed out and made palatable to people of democracies the radical notion of God’s realm. The translation above drops the idea of kingdom all together and substitute the notion of a “kin”-dom, a place where we gather because of kinship ties and common ground. Jesus was much more radical. In the face of the Roman occupation and of stubborn religious hegemony Jesus declared the Empire of God – a bulwark of justice and liberation amidst the injustice and oppression of his time.

-continue reading at The Bible In Drag – Queering Scripture.

The former archbishop of Milan and papal candidate Cardinal Carlo Maria Martini said the Roman Catholic Church was “200 years out of date” in his final interview before his death, published Saturday.

Cardinal Martini, once favored by Vatican progressives to succeed Pope John Paul II and a prominent voice in the church until his death at 85 on Friday, gave his view of the church as a pompous and bureaucratic institution failing to move with the times.

“Our culture has aged, our churches are big and empty and the church bureaucracy rises up; our rituals and our cassocks are pompous,” Cardinal Martini said in the interview published in Italian daily newspaper Corriere della Sera.

“The church must admit its mistakes and begin a radical change, starting from the pope and the bishops,” he said in the interview. “The pedophilia scandals oblige us to take a journey of transformation.”

Cardinal Martini, famous for comments that the use of condoms could be acceptable in some cases, told interviewers the church should open up to new kinds of families or risk losing its flock.

“A woman is abandoned by her husband and finds a new companion to look after her and her children.” he said. “A second love succeeds. If this family is discriminated against, not just the mother will be cut off, but also her children.”

A group of LGBT Muslims celebrated Eid Al-Fitr, the end of Ramadan, with pride and joy on the banks of the River Seine, Paris 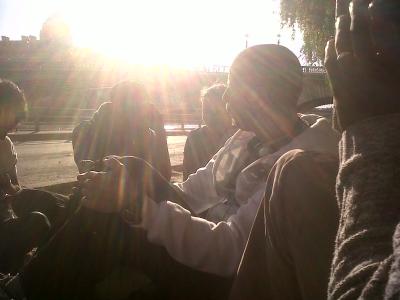 Last weekend, a group of LGBT Muslims celebrated the end of Ramadan with a special feast on the banks of the Seine.

During the month of Ramadan, Muslims observe a strict fast and partake in charitable giving and peace-making.

At the end of Ramadan, Muslims throughout the world celebrate Eid al-Fitr, the Festival of Fast-Breaking.

It is both a family and community occasion to celebrate the end of fasting, and thanking Allah for giving them strength throughout the fast.

During Eid Al-Fitr, Muslims have a special celebratory meal, the first daytime meal they would have had in a month. It is a joyous family occasion and also a time of forgiveness, and making amends.

On a sunny afternoon last Saturday (25 August) a group of 25 LGBT Muslims came together to celebrate Eid Al-Fitr with a picnic on the banks of river Seine, Paris.

Attendees were part of a LGBT Muslim free expression group, arranged by Collective of French Muslim Homosexual organizations (known as HM2F), which meet every month in the LGBT centre of Paris.

Queering the Church
Create a free website or blog at WordPress.com.