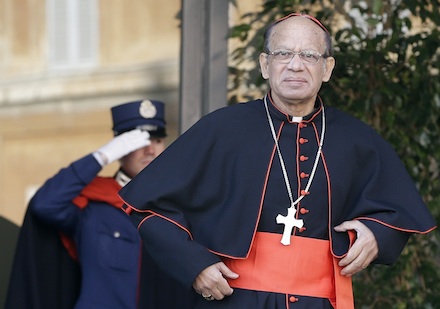 India’s Supreme Court reinstated a law that bans homosexuality as a “crime against nature” earlier this week, intensifying divisions between LGBT advocates and the religious communities they blame for this development. Catholic leaders have varied in responding to the Court’s decision, but there are hopeful signs as at least one bishop spoke out against the law.

Outlawing homosexuality in India dates to British colonial rule more than a century ago. Recent legal debates began after a New Delhi court overturned the law in 2009. Anti-LGBT organizations, including faith-based ones, have sought to re-criminalize homosexuality since then. The Supreme Court’s ruling now says it is up to the nation’s legislators to repeal the law if that is what is desired.

The Times of India reports that religious groups have welcomed the ruling, with leaders using extremely homophobic language and advocating “ex-gay therapy” in their statements. Relative to these, Catholic…

Indiana’s Catholic bishops issued a statement Thursday on the proposed constitutional ban on same-sex marriage — but they stopped short of taking a position on the hot-button topic.

The statement, signed by Indianapolis Archbishop Joseph Tobin and Indiana’s five bishops, emphasizes the sanctity of marriage between a man and a woman, but also the dignity of all people.

“The Church upholds the dignity of every human person, including persons with same-sex attraction, who ‘must be accepted with respect, compassion, and sensitivity,’” the statement says. “At the same time, the Church upholds the dignity and sanctity of marriage, a natural institution established by God. By its very nature, marriage is a permanent partnership between one man and one woman ordered to the good of the couple and the procreation and education of children.”

Church officials said the statement isn’t intended to stake out a political position, but to inform people about Catholic teachings as they weigh the issue.

“People have the right to make their own decisions on these issues, but it needs to be done with an informed conscience,” said Greg Otolski, a spokesman for the Indianapolis Archdiocese

Just as the Church of Ireland was consecrating its first female bishop, the Anglican Church in Canada was electing a woman bishop of its own.

(The Telegraph report of the Irish consecration of Bishop Pat Storey referred to her as the “first Anglican woman bishop”. This is not strictly correct. She is the first woman bishop in the UK or Ireland, but there have been several more in other provinces of the Anglican communion, including some recently appointed in South Africa and India, for example).

The Diocese of New Westminster in the Anglican Church of Canada elected the Reverend Canon Melissa Skelton to be its ninth bishop on Saturday.

In the heated debates over sexuality, sin and the Christian response, is there a possibility that the churches find common ground? A new report by Savitri Hensman for the religious think tank Ekklesia thinks there is :

Churches with different views in heated debates about sexuality actually share common ground and can move forward despite their differences, says a new paper from the Christian think-tank Ekklesia.

The research paper, ‘Church views on sexuality: recovering the middle ground’, by Savitri Hensman, rejects the popular idea that there are two warring blocks that may be labelled ‘traditionalists’ and ‘revisionists’. This is simplistic and can be misleading as well as unhelpful, it says.

In the new paper, Ekklesia identifies seven widely held viewpoints on sexuality within churches of different denominations and traditions. It shows that those with supposedly diametrically opposing positions often have more in common than they may at first think – even though they may presently disagree about same-sex relationships, for example.

Equally, it argues, coexistence among those sharing a ‘middle ground’ is not about weak compromise, but instead reflects an approach both deeply rooted in Bible and tradition and open to change as a living community led by the Spirit.

The abstract for the published paper gives:

Abstract:
It is clear that Christians hold a spectrum of views on sexuality and marriage. However, the popular idea that there are two warring blocks that may be labelled  ‘traditionalists’ and ‘revisionists’ is simplistic and can be misleading as well as unhelpful. Current tensions could be reduced and reframed significantly if more church leaders acknowledged the extent of common ground in the middle of this continuum, allowed limited flexibility of practice, and enabled their communities to develop practices of discernment oriented towards the “grace and truth” (John 1.13- 15) that lies at the heart of the Christian message. In this paper, Ekklesia associate Savitri Hensman identifies seven widely held positions on sexuality. She suggests that those with supposedly diametrically opposing views often have more in common than they may at first think. Equally, she argues, in Christian terms, that coexistence among those sharing a ‘middle ground’ is not about weak compromise, but instead reflects an approach both deeply rooted in Bible and tradition and open to change as a living community led by the Spirit.

This year, World AIDS Day conincided with the First Sunday of Advent. Pope Francis paid attention to both, in his Angelus message. The scriptural message for the first reading yesterday concerned an end to war (“turning swords into ploughshares”), and Francis looked forward to a time when nations will co-exist in peace. But for World Aids Day, he also included an expression of “solidarity” for all those affected by AIDS, and a hope that they will all have access to the healthcare that they need.

END_OF_DOCUMENT_TOKEN_TO_BE_REPLACED

The former President of Botswana has called for his country to decriminalize homosexuality and prostitution in an effort to slow down the spread of the HIV virus.

Festus Mogae, who leads the government-supported AIDS Council, told BBC that it is difficult to encourage safe sex in a country where homosexuality and prostitution are illegal.

“I don’t understand it [homosexuality]. I am a heterosexual,” he told BBC. “I look at women. I don’t look at other men. But there are men who look at other men. These are citizens.””After serving two terms in office, Mogae stepped down in 2008 and is widely admired across Africa. Under his administration, Botswana became the first country in sub-Saharan Africa to make anti=retroviral drugs widely available.Nonetheless, Mogae’s views are likely to be shunned. A government spokesman told BBC that homosexuality and prostitution would remain illegal practices until the state officials conducted a thorough study on whether changes to the law were necessary.
International Business Times

The popular image of homosexuality in Africa is of overtly hostile opposition, as in Sudan (where it is a capital offence) or in Uganda, where some local politicians egged on by Western evangelists, are hoping to make it so.
Zimbabwe is another African country where the President, Robert Mugabe, uses popular homophobia to camouflage his own manifest failings as national leader, claiming that  are “unAfrican”. The reality is that same sex relationships and transvestism were common and accepted right across Africa, until the colonial missionaries imported Western opposition. It is homophobia that is truly unAfrican. As the Ilga report on global LGBT equality shows, only eight countries have never criminalized homosexuality – all of them in Africa.
In the modern world, South Africa was the first country anywhere to include in its constitution protection from discrimination on the grounds of sexual orientation. Some South Africans, and Africans from elsewhere now resident in South Africa, offer important role models for the rest of the continent. the popular Zimbabwean / South African actor Frank Malaba is one good example.
From News Day:

Former Amakorokoza star Frank Malaba, well known as Dr Phumza by followers of the series might be a man President Robert Mugabe will never like to listen to talking.
Following a public revelation that he was gay, the South African actor-cum-radio personality opens up about marriage, his childhood as a gay student and his views on gay rights in an exclusive interview with NewsDay.
Malaba became the first Zimbabwean to declare that he loves other men.
Asked how his life has been after he opened up: “My life has been changed around for the better and I get inbox messages from young and old alike saying they respect my standing and who I am. I get young Zimbabweans, South Africans and on occasion Tanzanians and Kenyans asking for advice.
See Also:
Africa’s Female kings and husbands