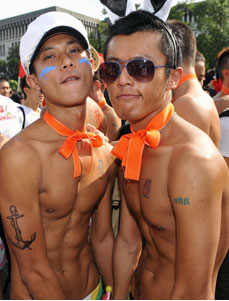 Thousands of gay rights supporters have marched through Taiwan’s capital, calling for increased tolerance and the enactment of anti-discrimination legislation.
The Saturday event is the ninth annual gay rights parade in Taipei, which has one of Asia’s most vibrant gay communities.
The parade has attracted gays from around the world, with many marchers dressing up as prom queens, zombies or sumo wrestlers.
About a dozen men and women marched behind a Malaysian flag, deploring the absence of gay rights in the mostly Muslim country.
Ming Yueh of Kuala Lumpur said, “We hope to learn from Taiwan so we can help our friends back home.”
Parade organizers called for legislation to wipe out deep-rooted gay discrimination in Asian cultures.”
EDGE Providence